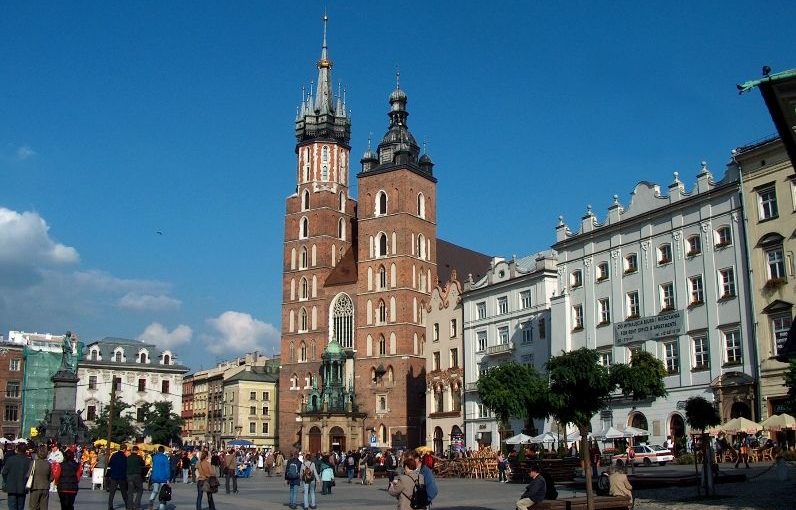 As the legend goes, Krakow was founded on the defeat of a dragon. The beast called Wawel Dragon terrorised all the people living in the King Krak’s town. They had to meet dragon’s demands, which were no more, no less than every-week sacrifices from cattle. After many tries to vanquish the terrible monster a young shoemaker outsmarted the Dragon by giving it a ram stuffed with sulphur. The beast consumed a ram and exploded like fireworks. In this way, the heroic shoemaker liberated his town from the monster. Much time has passed since these mythical events, but you can still feel the magical atmosphere of the beautiful „Krak’s town”.

Propably no other city in Poland has so many historic buildings and monuments or such a vast collection of artworks. It’s impossible to see them all during one stay. These are our top four recommendations – the most important must-visit attractions. Most Krakow tours include them in their schedules.
Main Market Square – one of the largest medieval squares in Europe (200 x 200 m). Usuallly it’s the first and most important stop during tours in Krakow. You can find there numerous antique buildings, such as the Sukiennice Cloth Hall, the Town Hall Tower, St. Mary’s Basilica, the Church of St. Adalbert, and other great sights. In the Main Market Square you can take part in many cultural events, visit the Historical Museum or spend nice time in one of many fancy restaurants or cozy cafes.
Lady with an ermine – the iconic painting by Leonardo da Vinci is undoubtedly one of Poland’s national treasures. It can be viewed at the National Museum in Krakow. The lady in the portrait is Cecilia Gallerani, a mistress of Lodovico Sforza, Duke of Milan. The ermine seems to be an allusion to Duke Sforza himself, who was called the White Ermine.
Wawel Hill with magnificent complex of Polish architecture and culture: the Royal Castle, Cathedral and the archaeological-architectonic reserve called the“Lost Wawel”.
Kazimierz – the former Jewish quarter laying just outside the Old Town. The mass deportation and extermination during WWII took lives, along with the atmosphere and fabulous Jewish culture. Today, we can speak of a revival of the district and you definitely should see it.

You can plan many beautiful and interesting Krakow tours on your own. If you want to book a tour with a professional city guides – you can find them on the internet. Some of the walking tours are even free.